We from Shogi-Berlin would like to take this opportunity to thank all participants and fans for their support in the past year. last year and wish everyone a happy new year. May the year 2023 be full of success, health and happiness and we look forward to many exciting and entertaining tournaments and competitions with you. Here's to a successful 2023!

The next Mori Ogai tournament is already in the starting blocks and can already look forward to a strong number of participants. A total of 8 players have registered and are spread across the entire spectrum of playing strength. This promises an exciting and varied tournament, where every player has the chance to to prove his skills. We look forward to a successful tournament and to seeing the performances of the participants.

It was also announced that next year's WOSC/ESC tournament will be held in Strasbourg, France, probably from July 27 to 30. Interested parties should already mark the weekend in their calendars and look forward to an exciting event in the Pavillon Joséphine in the Parc de l'Orangerie.

There will be another Môyû tournament this year, probably in September. More details will be announced after the Mori Ogai tournament. So fans of the game should look forward to another exciting event.

The Berlin club arrived with 4 players and met on Wednesday evening. On Thursday the team and blitz tournament took place.

The team tournament consists of teams of 3 players each. In the blitz tournament everyone has a time of 8min each without byoyomi. Because of the short time this tournament is not rated at the FESA.

Originally it was planned that we start with one team, Unfortunately, some found out early that the effort for the organization is greater than expected, so Berlin did not participate as a team.

After the initial phase died down, everyone still played the Blitz tournament in the evening. Unfortunately none of us had the luck to play against a professional shogi player (with handicap).

From Friday the main tournament started. Berlin had only one participant for the ESC, the second was just under the best 32 players. The chances were slim and so Berlin was eliminated from the ESC in the second round.

All of them won about half of their games and now the task is to develop a new strength from the lost games. 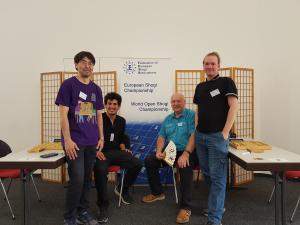 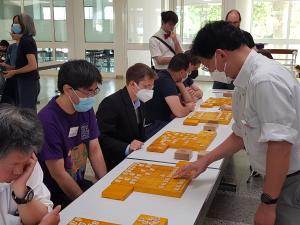 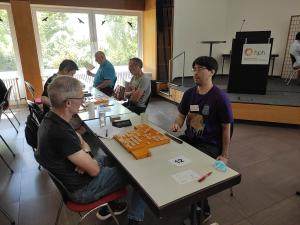 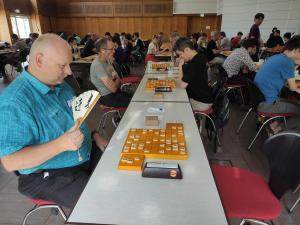 The Corona theme had us firmly in its grip for a long time, which of course also had a strong impact on our Club/Shogi evenings, so that the number of players decreased strongly and many did not come back.

It is all the more pleasing that after a long time we again had a well-attended day. Many new players joined us in the last weeks. Unfortunately we could not break our previous record (number of shogi players on a game evening), but we are optimistic that this will be the case soon.

On nice summer days we now play outside, right next to the normal meeting place.